watch 03:19
Wiki Targeted (Games)
Do you like this video?
Play Sound

Patio of the Silent Steps

The Amargura is an enemy encountered in Blasphemous. It is a four-legged beast covered with long hair. Chained to its back is a bed with two candelabra on its sides. The variety found in the Archcathedral Rooftops features a human hand that emerges from the bed, holding a chain with a caged Seraph armed with a spear attached to it.

While fighting, the Amargura walks back and forth, shooting fireballs from his mouth. These fireballs bounce high enough to pass over the Penitent One, so to avoid them it's sufficient to keep an eye on their bouncing pattern and run back and forth accordingly.

The best tactic to fight the Amargura is to deliver a few blows and then run back. When it uses the Fireballs attack, run to a spot where the fireball will bounce over the Penitent One. For the Archcathedral Rooftoops variety, the attached Seraph will also do a Spear Lunge if the Penitent One stays too close for too long. Prayers are also effective against this enemy. 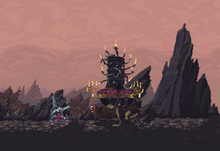 Retrieved from "https://blasphemous.fandom.com/wiki/Amargura?oldid=6862"
Community content is available under CC-BY-SA unless otherwise noted.