Brotherhood of the Silent Sorrow (Lore) 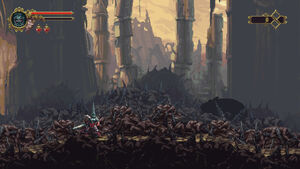 The Brotherhood of the Silent Sorrow was an order of devoted warriors. At the start of the game, the brotherhood was mostly extinct aside from the Penitent One.

All the members of the Brotherhood use a unique type of helmet resembling a capirote, a headpiece that originated in Spain and was used to denote penitent sinners. They also took a vow of silence as a form of penance, reminiscent of how the Twisted One remained silent during the events of the First Miracle. The Brotherhood's silence is interpreted as a reflection upon the silence of God.

The Brotherhood seems to have fallen in disgrace by a past sin or crime that put it in opposition to His Holiness Escribar. The nature of that crime is unknown but it seems to have something to do with the sword Mea Culpa, as it is hinted that the sword was specifically created by the Miracle to kill Escribar.