Crisanta of the Wrapped Agony

Edit
watch 02:46
The Quarry - The Loop
Do you like this video?
Play Sound

Crisanta of the Wrapped Agony

"I, Crisanta in penance, excommunicate you, expel you, execrate you, with the blessing of Our Miracle of the Greatest Pain."

Crisanta of the Wrapped Agony is a knight devoted to His Holiness Escribar and one of the last bosses in the game.

She is seen in front of the gates that lead to Escribar, where she confronts the Penitent One in an effort to stop his journey. When she is defeated, she escapes.

The official art book states that her sword is affected by the Miracle, so it is covered in red bandages that are anointed in consecrated oils just like the armor of the Anointed Legion.

In the comic, she mentions that the goals of her and the Penitent One are "different, opposite, yet complementary," suggesting that she is in direct opposition to the Penitent One's goal. This may give insight into her post-credits scene of ending A when she removes the Mea Culpa from the body of the Penitent One.

Crisanta forces the Penitent One to master both the parry and the dodge. The Slash attack is her signature move and the one used the most. Both parrying and dodging are viable strategies, but the parry, although more difficult to execute, cuts the animation and prevents the follow up.

The parry is easy to spot because the animation lasts for a long time and is easy to see, but it is followed by the regular Slash attack.

Crisanta will enter her second stage after losing between 33-50% of her health, then the red bandages will be removed from her sword, which will glow purple.

The Charge attack is by far her most dangerous technique. It is really fast and deals a great amount of damage. It cannot be parried or dodged through so time jumps wisely, however it can be blocked. 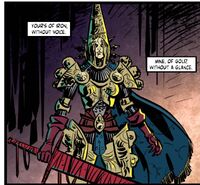 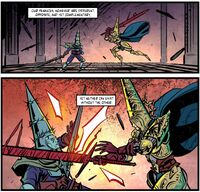