Desamparados is a character only featured in the comic book Blasphemous: The Kneeling. She does not appear in game.

She is a mysterious and intriguing character that was cursed by the Miracle for unknown reasons. As a result of this curse, her youth and beauty were sealed in a portrait while her true body is constantly aging and rotting, leaving her little more than a walking corpse.

She guides The Penitent One to the chapel where The Kneeling Stone rests so that he can take the Mea Culpa for himself. After he claims the sword, she says, "Henceforth... I will call you Penitent One," suggesting that she named him as such.

What happened to her afterwards is unknown. 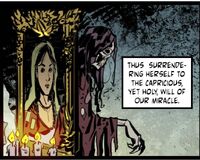 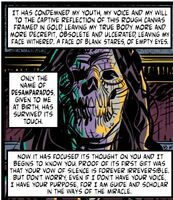