View source
watch 02:30
Dead Cells Final DLC - The Loop
Do you like this video?
Play Sound

The Mea Culpa is the sword used by the Penitent One, and it is the main weapon in the game. It is adorned with an effigy of the Twisted One on its handle and thorns that follow the edges of the blade. After meeting Deogracias for the first time, another thorn is added to the handle with the purpose of harming the user to feed on his blood and guilt. This thorn will continue to grow until it reaches its final form, the Cvstodia of Sin, if all of the Confessor Dungeons are completed.

Mea Culpa was created by the Miracle in response to the prayers of the woman who became the Kneeling Stone, as described by item descriptions and the comic. Desamparados describes it as "The Sword of the Father" and the "guilty blade". Item descriptions also indicate that the thorns are arisen from the Miracle and feed on the sin and guilt of its bearer.

It's possible that it was destined to be used to defeat His Holiness Escribar or put an end to the effects of the Miracle, as evidenced by the fact that Crisanta of the Wrapped Agony guards the entrance to Escribar's chambers and her dialogue both in the comic and before her boss fight.

Visit Mea Culpa Altars to increase the power of the Penitent One's sword. Visiting additional Altars allows access to further Abilities in return for Tears of Atonement. For the list of abilities, see here. 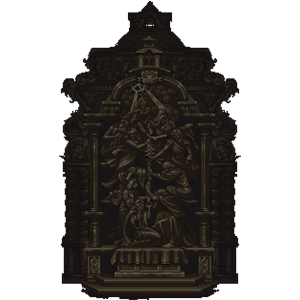 #02 In the Convent of Our Lady of the Charred Visage

#03 In the Brotherhood of the Silent Sorrow

#04 In the Mother of Mothers

#05 In the Library of the Negated Words

#06 In the Archcathedral Rooftops

#07 In the Desecrated Cistern