View source
watch 02:30
Dead Cells Final DLC - The Loop
Do you like this video?
Play Sound

"I am awake in a sleeping body."

Ten Piedad is a boss in Blasphemous. He is a combination of demon and plant with the body of a human and the skeletal head of a goat.

According to the relevant item descriptions, he was once a man who was haunted by visions of the Miracle. He became very tired and slept in the arms of the statue he is found in, but then woke up, realizing he had been transformed, trapped within a beast of constant anger and pain.

The official art book states that when the creature is asleep, the man inside awakes within the creature's dreams.

A simple way to defeat Ten Piedad is to stick close to him, and parry most of his attacks. Both his swipe and stomp can be parried, allowing the Penitent One to maximize damage against him. Both the swipe and the stomp count as heavy attacks, therefore can only be blocked and the Penitent One will be pushed pack significanlty. Alternatively, the swipe can be jumped over, and the stomp can be dodged through. Note that when dodging the stomp the vines will still follow the player unless under the boss.

Sprout Smash is extremely easy to avoid, as the boss takes a while to charge it. As his health goes down, the area where the sprouts cover turns bigger and he uses this attack more often. One can evade the attack as normal or doge into the boss while smashing, provinding a perfect window for flasks, prayers or damge.

As he loses health, his Sprout Stomp also summons more vines, going from just one to 3-4.

The Swipe is fast and can't be dodged through, but can be jumped over or parried. 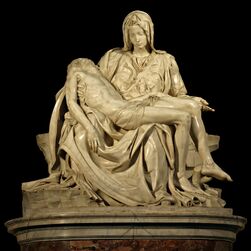